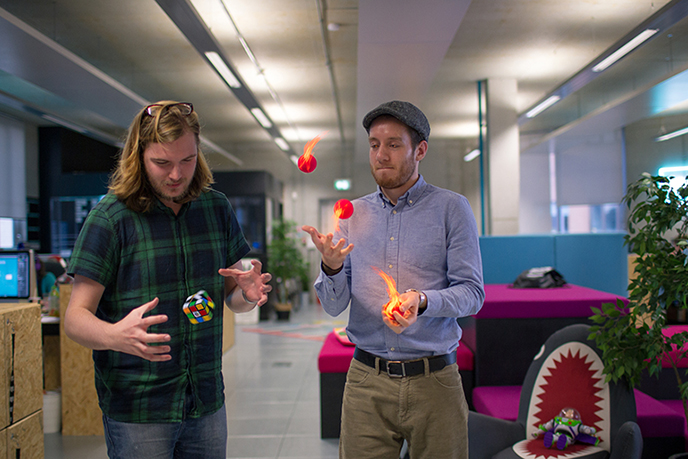 What actually is digital marketing? What skills do I need to succeed in the industry? What career paths can I follow?

These were just a few of the questions running through our minds when we decided to pursue this course. Rather than just finding out the answers and keeping them to ourselves we have decided to launch a new career interview series. The interviews will feature individuals who are experienced in digital marketing and are working in the industry. We found them highly inspiring, and hope that you do too!

Our first interview is with Asa Rodger, a Graphic Designer at Glasgow-based digital creative agency – MadeBrave.

What did you study at Uni?

I studied Graphic Design and production at RGU.

How did you secure your first full-time job?

I was in my third year of study and heard the lecturers saying that the Creative Director for an Aberdeen-based communication agency was coming in to the Uni to talk to the fourth years about placement opportunities after their degree. I ran down the stairs to the basement where they were. When I sat down with the Creative Director (Stewart Fallowfield) I was waffling a lot about branding he was leaning back in the chair, cross-legged listening contently until I mentioned I was reading a lot of Wally Ollins, at which point Stewart’s eyes lit up and he told me I was ‘on to some good stuff’. Later I found out Wally was one of Stewart’s heroes.

So I read a lot of design and philosophy books (one of which happened to be the right one to identify with the right person), I lunged at opportunities that presented themselves and I spoke about my influences and inspiration rather than my outputs.

What is your current role?

Graphic Designer. The role is pretty broad – I try to make good looking things, which make sense at the same time while saying a specific message to specific people.

Can you tell us what a typical day looks like for you?

In the studio there’s always music, it’s not the radio but a shared playlist everyone adds to so every day is very musically different. The kitchen is alive while caffeine freaks scramble around the kitchen island. I sit on my chair, and check emails, which often have a few gifs attached. I log time I should’ve already logged. Schedule my week. I quickly scan through Behance and Pinterest. We have a 10 minute ‘scrum’ meeting for the design team and talk about what we’ve got on. Then it’s go time and from there every day is different. I suppose the only constant is we try to gather together and share opinions, ideas and feedback as a team a lot through the day rather than work in isolation.

Often in the MadeBrave studio there’s lots of mad photography going on of scenes being created for photoshop retouching. It’s almost normal nowadays to see the Sugar Puff Daddy roaming around, clients trying out their Segway skills or Jedi battles being staged. 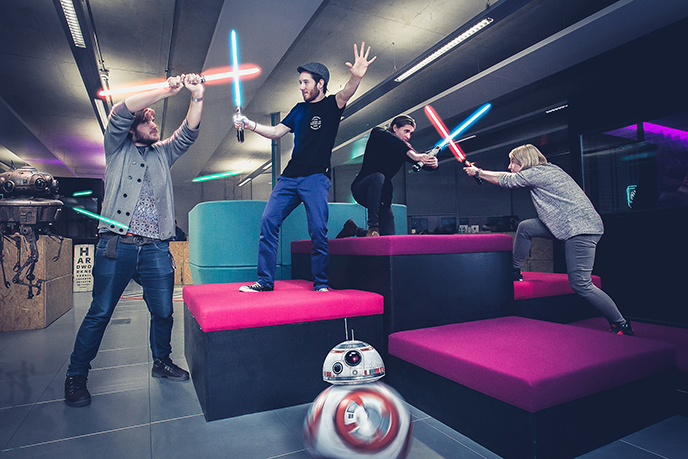 What advice would you give to someone thinking of a career in graphic design?

Just a few things that work for me personally but may be different for everyone:

1. Hoard experience! And not just the sitting-behind-a-desk kind of experience, any life experience can be used to help you think laterally rather than in a linear fashion and this is so incredibly useful for any design, writing or creative job. I am around ‘creative’ people all day and the ‘EUREKA!’ moment is very rare and even more rarely the best direction, ideas grow more organically and most the time those stepping stones are placed through influences, inspiration, experiences and personal reflections and not mythical lightning bolts.

2. Make lots of mistakes. And then learn from them – don’t just dismiss them as someone else’s fault, or invaluable wrongs. They could be your best teacher so try to be brutally honest about what the fault was and how to better it. You can shortcut this process by finding an expert who has already made thousands of mistakes and listen to them.

What role does digital marketing have in graphic design?

Design has to be more flexible than ever. Year by year it has to fit and mould to more and more platforms, devices and international audiences all because of the growth of digital marketing. Digital marketing has given a lot more people a much bigger platform to engage too, so the ability to stand out and project the right messages to the right people with laser precision due to targeted demographics has never been more important. The buyer journey has changed too, social media creates a stage for a dialogue much more of the time rather than a monologue of more traditional marketing avenues.

I suppose in terms of getting design work it’s really important to show off. Most designers I meet seem to be incredibly modest, but no one can deny the importance of a solid portfolio of work. So keep collecting the work, and not just the finished product. The gold dust is in all the thinking that came before it and how the idea grew legs before it walked. Oh and keep having fun!

Thank you Asa for giving us an insight in to your career and life in a creative agency. We look forward to seeing your work in the future! You can keep up with Asa over on LinkedIn and Twitter. Don’t forget to keep checking back for our next career interview post.